“Conscious Grandmothering:Making the Most of Being a Grandmother” by Yeshi Neumann

Shortly after my granddaughter Luna was born into my own hands, I decided to add another dimension to my life’s calling as a midwife. I began to work with grandmothers.  I was inspired by a historic gathering of 13 indigenous grandmothers from five continents who came together to form the International Council of 13 Indigenous Grandmothers in 2004 in upstate NY.  They believed they were fulfilling an ancient prophecy, known by many of the world’s indigenous tribes: “When the Grandmothers from the Four Directions Speak, the Earth will be healed”

Out of concern for the planet and all its inhabitants for the next 7 generations, the Grandmothers stated: “We… believe that our ancestral ways of prayer, peacemaking and healing are vitally needed today. We come together to nurture, educate and train our children… to defend the Earth herself…” 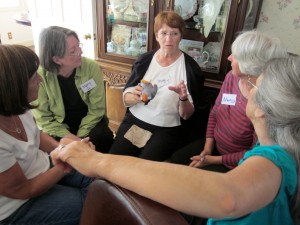 The mission of these Grandmothers encouraged me to bring together grandmothers in this country. I created a project called Conscious Grandmothering – in order shine the light on what it means to each of us to be a grandmother, and how to make the greatest impact, both individually and collectively.  The 40 million grandmothers in the US (a number growing larger everyday thanks to the baby boomers) are a powerful resource for the betterment of our families, our communities and our Mother Earth. There has never before been such a critical mass of older women with an education, a tradition of social activism, the ability to make a living, a computer and, for some of us, access to  financial resources.

I define Conscious in Conscious Grandmothering as being Aware, Awake and Deliberate.

AWARE:
We must be aware that:

1) It is critical to fight  the ageism that pervades our society, the myth that  many of us believe,  that we are useless has-beens when we become grandmothers. The truth is that several decades of living makes us more qualified, not less, for the job of protecting our planet and all its inhabitants.
2) The latest research on brain plasticity demonstrates that us “old dogs” not only CAN “learn new tricks”, but the part of our brains responsible for empathy and cooperation, so necessary for world peace, gets bigger and stronger with increased use.
3) We grandmother now in the context of a global movement of activist grandmothers. Paola Gianturco’s upcoming book, Grandmother Power, describes grandmothers from 150 countries on five continents “who are fighting courageously and effectively–against poverty, disease, illiteracy, environmental degradation, and human rights abuse–to create a better world for grandchildren everywhere.” (http://www.globalgrandmotherpower.com)

Being awake in the present moment enables us to choose our response to the people and situations we face, rather than just react out of habitual unconscious patterns.  An example of a critical moment  in which to be awake is when we   communicate with  the parents of our grandchildren about cultural, personal or generational differences.  Because of previous unsuccessful attempts, many grandparents adopt the strategy of  “walking on eggshells” in relation to controversial issues. In Conscious Grandmothering we explore another  strategy — that of  being awake to our customary ways of communicating  and the potential benefit of sharing our vital perspectives in more empowered and  skillful ways.

DELIBERATE:
Being deliberate is  honing our intention about how we want to grandmother. The huge changes that have occurred in the world since we ourselves were grandmothered – such as changes in family structure, technology, potential for longevity,  global threats to the survival of our planet  greatly affect our role as grandmothers. There is not necessarily a ready-made template  for being a grandmother that we can adopt. We are neither necessarily sitting sweetly in our rocking chairs nor being the authoritative matriarch of our family. Being deliberate is not about  being the “perfect grandmother” ; Its about grandmothering in a way that is consistent with our deepest aspirations.

Now is the time to connect with other grandmothers, to share our challenges and celebrate our joys. It is time to explore what we can accomplish with each other’s support and in alliance. Your calling might be to enhance your relationship with your grandchild, to bring a needed service to your particular community, or to address a global challenge.  Regardless of the direction of your calling, I urge you to be a Conscious Grandmother, aware, awake and deliberate. 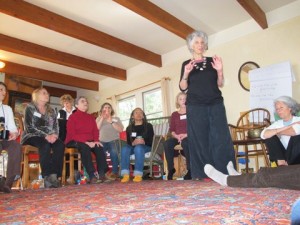 The workshop will include the creation by the participants of a ceremony to celebrate the rite of passage to Conscious Grandmothering. This gathering is not just for biological grandmothers, but also for any wise, elder woman who wants to be in council with kindred spirits, and cares about the world’s grandchildren.

Bio:
Yeshi Neumann has been working as a midwife since 1970 in the US and internationally.  For the last few years she has served as  the principal educator in the maternal-child health project, called ”Jungle Mamas”, in the Amazonian Rainforest in Ecuador.

Yeshi co-founded the Women’s National Leadership Project in 1990 and has facilitated hundreds of workshop on women’s leadership, diversity, communication, conflict resolution and healing family relationships.  She trains leaders from the non-profit, philanthropic, labor and socially responsible business sectors in the Art of Leadership at the Rockwood Leadership Institute.

Yeshi brings her passion for women’s empowerment, social justice and mindfulness to her work with mothers, grandmothers and community leaders.

Yeshi is a Certified Nurse Midwife with a Master degree in Public Health. She is the mother of two grown daughters and the grandmother of two granddaughters both of whom were born into her own hands.