“I Have a Dream, Trayvon Martin and the Voting Rights Act” by Bev Scott

Bev Scott wrote this piece in 2013.  I think it is still appropriate as we continue to deal with racism  in this country with the recent events with Michael Brown in Ferguson, MO, Eric Garner in Staten Island and now Walter Scott in South Carolina.  We as elders have an  have an opportunity to change our own reactive responses  and help those coming after to end inequality in all it’s forms.  We are getting help to make this change from some of the young especially the Millennials who are known to be tolerant of difference.

Let me know your thoughts.

This month we celebrate the fiftieth anniversary of the 1963 March on Washington and the Reverend Martin Luther King’s inspirational “I Have a Dream Speech.”   In that speech, Dr. King called for our country to meet the “promissory note” written in the Constitution and the Declaration of Independence….the promise that all men are guaranteed inalienable rights of life, liberty and the pursuit of happiness.  He reproached America for defaulting on that “promissory note”.  Yet he optimistically refused to believe that “the bank of justice” was bankrupt.  Fifty years later, we still have not fulfilled the promise.  Recent happenings emphasize that as a country we are still behind on our promise.  Is it any wonder that some worry that the “bank of justice” is bankrupt?

The verdict in the Trayvon Martin case brought forth healthy dialogue in the spirit that would make King proud.  It also, sadly brought forth vicious racist diatribe.  The jury in the case determined that 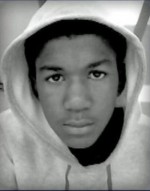 according to Florida law, George Zimmerman did not murder Trayvon Martin.  Many in the white community argue that justice was served, agree with the verdict and don’t understand the angry reactions from the black community.   One of the reasons that many in the white community don’t understand is that as whites we haven’t lived our lives facing the suspicion of authorities that we are a punk, a criminal or involved with drugs. Yes, our hearts might race momentarily when we are pulled over by the police, anxious about getting a speeding ticket. But we do not live with the common experience of suspicion simply because of the color of our skin.  We are not stopped as we drive through our own middle class neighborhood as an excuse to search our cars for drugs, nor are we arrested and thrown in jail on the suspicion that we committed a burglary because we happen to be the same skin color as the burglar, nor are we roughed up, frisked or shot because we look like we don’t belong in the neighborhood.

As a college student in 1963, I remember listening to King’s speech and being inspired by his dream.  That inspiration led me as a young white woman to become an activist in support of civil rights, to work in the “War on Poverty” and to become involved in anti-racism education.  When I first heard King’s speech, I thought the problem was rooted in the South and in big urban areas.  I wanted to change the voting rights laws and remove “Whites Only” privileges.  I wanted to increase opportunity for the poor and disenfranchised.  But I learned from my experience that the problem was not only in discriminatory laws and practices but that the problem was also lodged inside me and each one of us who are complicit often in blissful unconsciousness of how our white privilege serves us.  It is the ignorance of what white privilege means that many of us in the white community don’t understand and it is the knowledge and experience of what white privilege means that angers the black community.   Because of white privilege, If Trayvon had been white, he would still be alive.

I wrote recently about the excitement and celebration for the Supreme Court decision striking down DOMA and allowing the lower court ruling against Proposition 8 in California to stand.  These decisions are great leaps forward in support of the civil rights of gays and lesbians.  Yet that same week, the Supreme Court delivered another decision which also highlights our current default on the “promissory note” of equality for all.  That decision struck at the heart of the 1965 Voting Rights Act allowing states with histories of voter discrimination to change election laws without federal approval.  Some states moved almost immediately to require voter identification and to begin re-districting as this Supreme Court decision allows without federal oversight on the potential impact of disenfranchisement.

The Court seems to believe that we are beyond discrimination at the ballot box almost fifty years later.  Do they believe the “promissory note” been paid off? The moves by these states demonstrate that it has not.  To counter the moves by these states to enact so called “anti-fraud” and other laws of potential disenfranchisement, civil rights leaders are now acting in defense.   They recently announced a campaign called “American Values First” which will fight for legislation and will offer templates to expand voting rights in all 50 states.

Dr. King said “The arc of the moral universe is long, but it bends toward justice.”  The arc is not complete.  We still must bend it toward justice when it veers off,  take a stand to pay off the “promissory note” of freedom and liberty and fulfill King’s dream, “that one day this nation will rise up, live out the true meaning of its creed: ‘We hold these truths to be self-evident, that all men are created equal.’”