“Interview with Barbara Zoloth 6 months after retirement” by Bev Scott

Barbara, you are well over traditional retirement age, yet you are healthy and vital, why did you decide to retire at this time?

I can afford to retire now…I would have retired sooner if it had been financially feasible.  I felt done with my job both emotionally and energetically.  Parts of it were tedious although there was some challenge.  I had gone to part time and I know I would not have lasted as long as I did if I’d continued working fulltime.  I just had less energy for the job than I used to.

Many people lose interest and get bored at work as they near retirement.  How did your decision impact your role at work?

I worked for the same company for twenty-eight years.  It took good care of me and fed me both intellectually and financially.  I was in my most recent position there for eighteen years.  I had a really good boss and that helped a lot.  I had been talking about retiring for several years but I hadn’t given my boss an exact date.  When I was ready, I gave him nine month’s notice.  I don’t think it really impacted my role at work.  The work was very project oriented, and we pretty much worked on one project at a time.  If there was a change, it was that I perhaps was acting more as a consultant to my colleagues than before.  Instead of working on just one project, I would take on the parts of a few ongoing projects in which I had particular expertise. At the end did I probably began to get a bit less interested and motivated, but I didn’t let that affect my productivity.  I was very glad I gave that much notice so that people knew I was leaving and could prepare for it.

Many people don’t do much planning for retirement except the financial planning.  Have you planned for your retirement beyond the finances?

I anticipated and looked forward to retirement.  I enjoyed making plans.  An ex-colleague who had moved to a different job called me shortly before I retired to ask if I wanted to do consulting work.  I said don’t talk to me about it until at least 3 months have passed.  When he did call, I said “no, thank you”.  My job never fed my heart and soul.  For that I’ve always did things outside of work such as volunteering, dancing, political and organizational work, and traveling.  I was looking forward to having more time to do those things I like to do, which indeed I now do.  I thought it would be a relief not to do my day job.

Leaving a position after 18 years and retiring from work that supported you both financially and intellectually is a huge change.  Let’s talk about your experience since you retired.

In the beginning, I had a hard time keeping track of time.  I missed a couple of appointments because I didn’t check my calendar.  My niece lived with me for 3 months, 2 of them were right after I retired, and I had some tasks that I gave myself. But when my days became less structured it became more difficult.  It is disorienting to have to create a structure for myself.  I have been taking classes in Adobe Software for three hours, four days a week.  This has helped give my day structure and provide me with the intellectual stimulation I need.  It’s also been fun!

As spring approaches, organizing for the dance competition in April will be meeting those same needs. Actually my dance work as chair of the competition organizing committee is very meaningful for me.  I have a leadership role on the board of the national dance organization as well.  Part of my focus is to grow and support the dance community, and this gives me an ongoing sense of purpose as well as specific tasks.  I am also still doing some political work.

I love spending time with friends in a more relaxed way.  I am getting tasks done with a sense of accomplishment.  I like being able to spontaneously visit with my backyard neighbor.  I feel I need to have more regular exercise in my life, and it is still a bit disorienting without structured time.  I ask what day is this?  Do I need to get up?  What do I need to be doing today?  It is being untethered that is disorienting…a similar feeling to how I felt after my parents died.  It’s like pulling up the anchor and floating free.  A good friend warned me that this would be a big change in my life….a big deal.  I am still getting used to it.  It takes time to adjust, but it’s getting better.  Basically, I’m LOVING being retired!  I love the flexibility and the freedom and the reduced level of stress.

Sounds like you have incorporated many of the principles we emphasize in our 3rd Act workshops and coaching:  finding meaning and purpose, being actively engaged, expressing appreciation and gratitude and finding pleasure in everyday.

Congratulations on transitioning to your 3rd Act! 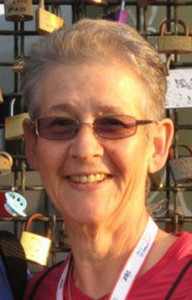 Barbara worked at Wells Fargo Bank from 1983 until her recent retirement in 2011 as Vice President and Senior Credit Examiner.  She holds a PhD in economics and an MBA in Finance.  She taught economics at several universities including UC Davis.  She has attended United Nations International Women’s Conferences in Nairobi (1985) and Beijing (1995).  Barbara has traveled widely for enjoyment.

She has extensive non-profit board experience and currently serves as the Founding Board member and President of the North American Same-Sex Partner Dance Association, Founding Board member and Treasurer of Bay Area Same-Sex Dance Association, the Organizing Committee Chair for April Follies Ballroom Dance Competition and The Steering Committee Bay Area Women in Black.