“Making A Difference” by Meredith Stout 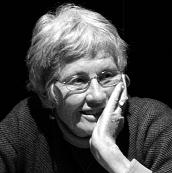 Fourteen years ago, in my early sixties, and without much direction, I was dabbling in art and doing some free-lance photography. At the same time, I was increasingly dismayed by the social injustices around me and wanted to use my love of photography to somehow make a difference in my community.

My life focus changed dramatically when, serendipitously, I was asked by a local magazine to do a photo documentary of the Women’s Daytime Drop-in Center, a small agency in Berkeley that provides support for homeless women and children. Thus began a journey in social activism and art that would change my life.

At first I was embarrassed by my fancy camera and was anxious about how to proceed, but I was struck by the beauty and openness of the women. I finally had the courage to ask one woman if she would like a photograph. She beamed. I began taking close up portraits, developing them in my darkroom, and giving each client a copy.

“You’re beautiful” I would say from behind my lens. “I wish you could see yourself.” Through our close bond, the women began to feel visible and cared about. I soon realized that the photographs were so evocative that this was not a standard documentary; it was about the dignity and truth of these women.

One day I met a client at the Center, Zelma Brown, who began writing poetry to express what she saw in the images. Although we were from totally different backgrounds, she, a young African American from an abusive upbringing, and I, a white college educated former faculty wife, we saw life through the same lens. We both cared deeply about the injustices of poverty and racism.

Soon I enlarged and framed the photographs and we had a gallery show. Then some friends volunteered to read the poetry, we projected the photos on a large screen, added music and discovered that our art had evolved into a powerful multimedia performance. We formed a non-profit called The Sisters Project, someone donated a van, and soon Zelma and I and six readers were giving presentations throughout the Bay Area about the plight of homeless women and children. In addition to being a photographer, I became an administrator, a fundraiser, and a public speaker — all because I began with one photograph.

Two years after Zelma’s untimely death in 2008, The Sisters Project has closed. I continue to photograph at the Drop-In Center and cook lunch for the women every Thursday. I  deeply believe that if you do what you love to do and you keep doing it, you will make a difference. You may never know what that difference is, but it will happen.

You are invited to visit the Red Oak Realty Company, 2099 Pleasant Valley Ave in Oakland (@ Broadway) to see a beautiful exhibit of the photographs. Also please visit HYPERLINK http://www.jjill.com/jjillonline/compassion/community.aspx for another story about my work, and http://www.womensdropin.org/ for more information about the Women’s Daytime Drop-In Center.