“Retirement What?” by Carolyn E. Rendu

I am happy to introduce you to Carolyn Rendu.  I met her and her husband on my 70’s Road Trip to Oregon.  We were all staying at the Sylvia Beach Hotel (www.sylviabeachhotel.com) on the Oregon Coast and began talking around the dinner table after playing an exciting game of “Truth and Lie”  Her interests and passions where all true and fascinating to me.  I thought you all might enjoy meeting her as well. 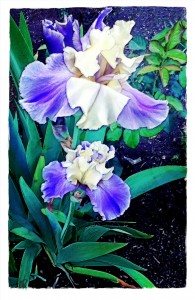 It’s come to that point in life where I have to take a look at a word I’ve been avoiding. An inevitable word that’s been shifting furtively in the fringes of my attention. But a day comes when the elephant has grown so much it’s actually got your attention. Retirement has always been a vague idea lurking in a dim corner of some back shelf in some far future time. You know how that goes. But here it is, sitting on my shoulder and demanding that I think about it. But even that seems strange; to think about what it is. I mean, retiring from what?

What do I want to retire from my life and what about those things I like doing? I want to keep those. Well, I enjoyed painting on the computer. I had a knack for it though I can certainly understand why artists would not like it. Losing all the sensual, tactile qualities of paint and paper as you move into this hermetically sealed virtual work space does not suit everyone. But I like the challenge of solving problems visually using vast computing power even if I don’t care in the least knowing how computers do what they do. I really like what they can do. 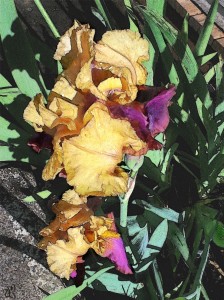 So what happens when one is set free? I hate to admit it, but being self directed can be daunting. When you work for someone else you always know what you’re to paint. You know if it’s working well or not. But the project designer is me and only me to answer to. So I have to say that I feel quite lucky that a little device was placed in my hand which opened up a constant stream of ideas. So much so I feel I’ll never get to the end of it. I carry with me an instant sketch book and have made literally thousands of sketches all stored in memory, waiting for me to do something with them. I’ll never run out of visual ideas with which to work. I consider this my third digital revolution-evolution.

I use low resolution images from an iPod4 camera. Between apps with a multitude of filters that give endless permutations, and desktop software, Photoshop and Painter X3, there is no end to variations. I can paint, draw, cut, paste, combine, eliminate, change colors, choose textures, all in endless variety. It’s my candy box. As I continue exploring the new tools which are also always evolving, grand schemes come to mind. Like a book. I love iris… a 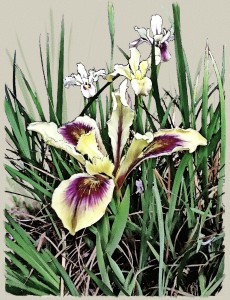 Book of Iris perhaps? Just images. Who knows; more ideas will come. It’s all EVOLVING and I love that.

In a (lesser known) quote by Friedrich Nietzsche, he says; “The Essence of all beautiful art, all great art is gratitude.” I will not claim great beauty or great art but I will claim great gratitude for such marvelously expressive tools to work with. That’s it, really. What fuels your passion, spread that in the world. You don’t need to worry about the end goal anymore. It’s the love you express through what you do. That’s the thread that makes sense of retirement because, you know, I’m not really retiring at all. I’m too busy. 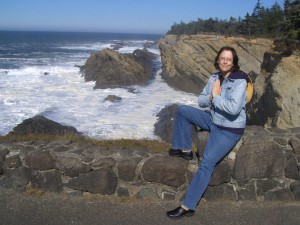 BIO: Carolyn Ensle Rendu has a BFA from University of Colorado Boulder. Did Botanical illustration at Henderson Museum (UCBoulder) as well as the Arboretum in San Francisco. This demandingly precise and picky work led to a career in film production art. Started in Film Special Effects when it was still done under camera for Industrial Light and Magic in San Rafael. Moved with the digital revolution, painting textures on 3-D models for such films as Jurassic Park and DragonHeart. Relocated to Los Angeles to begin work at animation studio start-up, DreamWorks. Went though a second digital revolution as the new technology changed the entire workflow of animation. Painted 3-D models on such films as Prince of Egypt and Road to Eldorado.