“Shift and Shout: The First Scene of Our Third Act” by Dewey & Susan Watson 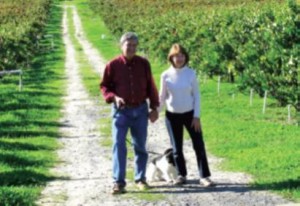 “We are among the first Boomers, born at the very beginning of that post-war explosion of fecundity. We have been on the cusp of cultural change all our lives, continually influenced by the last generation while experiencing our own. This next phase of our lives is no different. The idea of retirement is “so last-generation,” in the words of our children. In the world of that last generation, now long lost to most of us, there were career-long jobs, defined benefit pensions, retirement ages, and gold watches. Except in the public sector—and even that is now under fire—such rewards are now mostly nonexistent. This means that our generation will live our next phase of life, what would have been called retirement, in an entirely different way.”

– From the Foreward, Shift and Shout

In 2009, at age 64, we made the decision to move from our home of over 40 years in the East Bay hills, to the wine country of west Sonoma County.  While many people choose to make such a move in retirement, we had no intention, or more importantly, ability, to retire.  Moreover, we were completely happy with our lives together in Oakland, sharing a large community of friends and acquaintances garnered from a lifetime of community engagement.

Then one day, when Dewey was returning from a church retreat in Sonoma’s West County, he made up his mind.  Several hours later, after a discussion of the pros and cons, Susan was ready to make the same move.  Prior to that day, we had never given the idea of moving anywhere more than a fleeting thought.  We decided to write about this experience in our book, Shift and Shout. William Sadler, a scholar and author of several books and studies of third age engagement, said:

“As someone who has been studying people who have been creatively designing a fulfilling “Third Age”, I am impressed and inspired by how Dewey and Susan have collaborated to create the life they truly want after 60.”

Actually, we were to find out what “we truly want(ed)” after we made our Shift.  Prior to moving we saw ourselves imposing our Oakland life in another location with little thought given to how much the move would affect our daily lives.  What we discovered was that the actual change of physical location, particularly to a beautiful and culturally active part of the world, acted in its own way to lead us to “what we truly want”.

The joys we write about of West County Sonoma (Shout) has been called a guidebook for anyone thinking of re-locating to this area.  Our story of discovery of the wonders of this part of the world unfolds one musically themed chapter at a time.  We had left all the urban amenities of Oakland (world class restaurants, music, and of course wine) to find the joys of living in an agricultural part of the world.

The idea of writing the book evolved collaboratively.  Every day our first year led us to new encounters, some as insignificant as a friendly clerk and some so astounding they rose to the level of a true adventure.  When we shared these stories, others often responded with amazement.   Susan began  to think the stores noteworthy and suggested that we write a local column about West County from the eyes of the newcomer.  But Dewey, an author of other books, suggested, why bother with a column, let’s just do a book.  As we focused our energies on gathering more activities and experiences, we further broadened our discoveries of all that West County has to offer.

The experience of co-authoring  the book presented challenges that brought out our different talents and united us in unexpected ways.  Although the book is written in our separate voices (which is somewhat like listening to a conversation between us) each of us felt compelled to edit the other’s text.  Unlike our professional editor, these comments were not neutral.  They came with the charged emotions typical of any relationship and needed to be handled diplomatically (which did not always happen).  The challenge of timing also weighed on us.  Dewey, an experienced writer, would finish chapters in hours, moving on to the next story while Susan would take days to lend her voice.  “How’s your chapter going?” became an unwelcome mantra.  In the end, the process strengthened our love for each other and gave both of us new admiration for our respective capabilities.  It honed our investigative and writing skills and left us with our own tale that transcends our individual oral histories.

Shift and Shout is our tribute to West Sonoma County, but it is also a memoir of why and how personal change (Shift) happens.  It is the first scene of our Third Act.

Dewey Watson is a 41 year San Francisco attorney who has held both public office and served as President of various non-profit organizations.  He has written one historical book, The Family Story, and has blogged and written extensively both professionally and as an advocate for charitable causes.   Susan Watson spent her career in the travel industry and has worked with numerous charitable organizations in the East Bay and now West County Sonoma.  This is her first venture into the writing world.