“Volunteering for a Presidential Campaign” by Bev Scott

I just returned from Ohio where I worked on the Presidential campaign. Readers of this blog may remember that last summer I wrote about my consideration of volunteering for a Presidential campaign. I explained my concerns about the divisiveness in our country, the influence of big money, the vicious, racist, sexist, homophobic accusations and the blatant lies as well as the effort to turn our religious freedom into a Christian Theocracy.

I did sign up to work on early voting for the Obama campaign in Ohio. I chose Ohio because it is a swing state and my very good friend, Sue, offered me a place to stay. I chose the Obama campaign because I believe that my values and my own self-interest are better served by the Democratic Party in the White House. 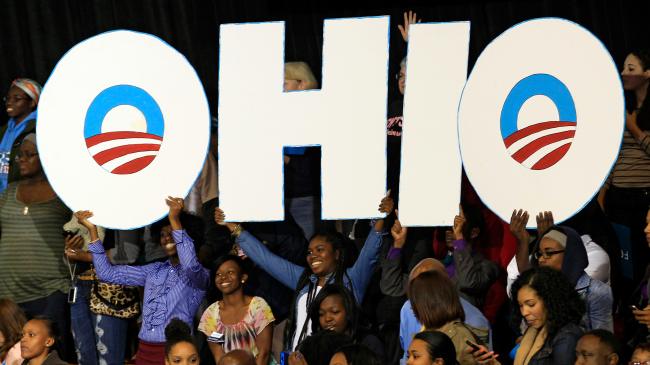 Like many I have been disappointed that Obama has not been able to miraculously heal our economic woes, create millions of good jobs and return foreclosed homes to their owners. I wanted him to move faster to end the wars in the Middle East. I believe that he allowed the guilty executives of financial institutions to get away with moral and legal shenanigans for which they should be held accountable. I thought he took way too long to end “Don’t Ask; Don’t Tell” and I couldn’t understand why his decision to support gay marriage was so agonizingly slow when he said he believed in equal rights for everyone.

Can I support him for another term? He ended the war in Iraq and the war in Afghanistan is winding down. I have learned that the problems with the economy, job creation and underwater mortgages have more to do with the control and influence of big money and a recalcitrant Congress than they do with decisions by President Obama. I have heard the many hateful comments made by Republicans against women and I hear Romney’s threats against Planned Parenthood. I know that two or three Supreme Court Justices will be appointed by the next President. I fear that, as a woman, I may lose control of the choices I have over my body depending on who is elected. I fear that as a lesbian married (in California) to my partner and spouse of thirty-four years that I will lose the potential of equal rights when the Court considers the challenges to the Defense of Marriage Act (DOMA).

Our health care system as we all know is totally broken. I give credit to the President to make an initial effort to fix it. Yes, the Health Care Act is not perfect. It was challenged and undermined in Congress by special interests, the corporations which benefited from the broken system and the elected representatives who swore to obstruct the new President in any way they could. But it is a step in the right direction. Historically, in our country, we have often not gotten it right. We have learned that we can make changes and improvements. Tossing it out as proposed by the Republican Presidential candidate is not a solution. We must create a health care system that serves all of us not just those who can afford insurance. We must also protect Social Security which is often the only income for many elderly. Although it too needs some improvement.

In addition to these considerations, I believe that people in the Democratic Party tend to be more collaborative, caring, humanistic and concerned about others. Since I believe that we must come together to each pay our share for the services that support our towns and cities, that pave our roads, that provide a safety net for the poor and the down and out, that rescue and provide relief for people stranded by storms like Sandy and then provide help to communities to re-build, I believe supporting the Democratic party is more closely aligned with my values.

So although I don’t totally agree with President Obama, my self-interest and my values are more aligned and better served with the Democrats in the White House.

So I worked as a volunteer to get out the early vote for Obama in Ohio. Supporting Obama for President is personal, it is political and it is common sense.